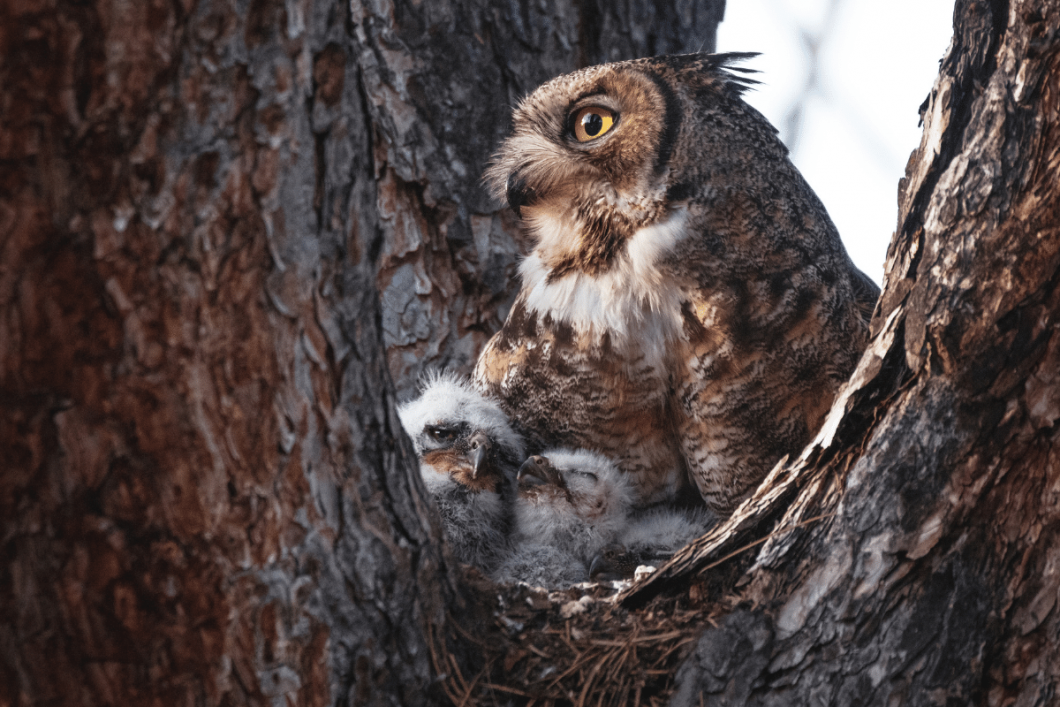 Owls are among the most fascinating creatures in the world. They have a distinct look and hunt small animals, insects, and other birds. What’s more, with over 200 species of owls, it is the most widely distributed raptor on the globe. Thus, many people wonder where owls live.

More than 200 species of owls may be found in a wide range of environments. Many owls, such as the great gray and great horned, nest in ancient hawk or squirrel nests. While others, like short-eared owls, build their nests on the ground. Burrowing owls nest in tree cavities or dwell in old animal burrows.

Where do Owls live?

Different owl species dwell in various environments, including forested regions, rainforests, grassland plains, and deserts. Except for Antarctica, owls may be found all around the globe. They live in deserts, plains, and even the Arctic tundra.  Owls may dwell in trees, hollowed-out logs, cactus, holes in the ground, barns, or abandoned bird nests.

They hunt their prey patiently from high trees, but they do not dwell in treetops. And they make their home in lower shelters such as bushes, shrubs, and tree trunks. Some, like burrowing owls, spend their life below in holes created by other creatures.

Where do Owls sleep?

During the mating season, owls sleep alone, near the nest on a tree limb. Aside from it, owls sleep in a variety of locations. Owls sleep mainly on tree branches, although they also sleep in hollow trees, chimneys, abandoned buildings, cracks, and other such places.

However, owls practically never sleep in the nest. During the mating season, they sleep around or near the nest but not within. Owls are excellent predators but poor nest builders. They don’t construct their nests and instead prey on the nests of hawks, falcons, eagles, and other animals. The roost is the name given to an owl’s sleeping quarters.

How do owls build nests and ground nests?

Owls are not skilled nest builders, and instead of flying back and forth with a slew of twigs, they will seek open holes in trees or big cactus plants. All they need is a cozy corner that offers sufficient shelter from predators and the weather.

Being opportunists, owls often relocate into abandoned bird nests. Large birds like crows, hawks, and great blue herons build an owl’s ideal snug outside tree nest. These nests are exactly the perfect size for laying eggs and caring for two or more youngsters after hatching.

While most people think of owls as dwelling in trees, burrowing owls prefer to live underground. Digging up the soil to make a hole in the earth is not something that howls like. That is why they delegate this problematic task to prairie dogs, armadillos, and squirrels.

These tiny owls just go into abandoned nests and settle there. When alternative nesting sites are not accessible, they will dig their own burrows.

Things You Need To Know About An Owl Box

What is an Owl box?

An owl box is a wooden construction built by humans. It is often square or rectangular, with an opening big enough for adult owls to pass through. A flat or circular perch underneath the box entrance may be installed to enable the birds to stand and maintain a watch outside.

Owl enthusiasts often put these boxes inside barns or connect them to long poles to promote nesting activity.

What To Consider in Building an Owl Box

Your owl box designs don’t have to be fancy to be effective. However, you’ll need to figure out how to construct an owl house that’s the appropriate size to serve as a nest replacement for the kind of owl you want to attract to your garden.

Remember to add more drain holes in your owl cage designs. The owl nest box must be well-built to prevent it from breaking apart when an owl family comes in. Also, the location where you will put the owl nest box is very significant. Make sure it is visible and far from dangerous predators.

Do Owls ever change habitats?

Owls are natural hunters that need good food sources to stay in a region. When food becomes limited, they seek other areas with better hunting circumstances. Forces too powerful for owls to manage may impede their capacity to locate new breeding and foraging areas.

Some owl populations are declining due to changing climatic conditions and human habitat encroachment. Owls may be found in almost every part of the globe, and their presence helps keep rodent populations in control. These fascinating birds make any corner their home.

With so many owl species globally, they could be seen in various environments, including woods, deserts, mountains, and plains. These birds may migrate during the winter months or remain in the same area all year, depending on the breed. Except for Antarctica, owls may be found on every continent. They are natural hunters that are skilled at seeking new nesting sites when necessary.