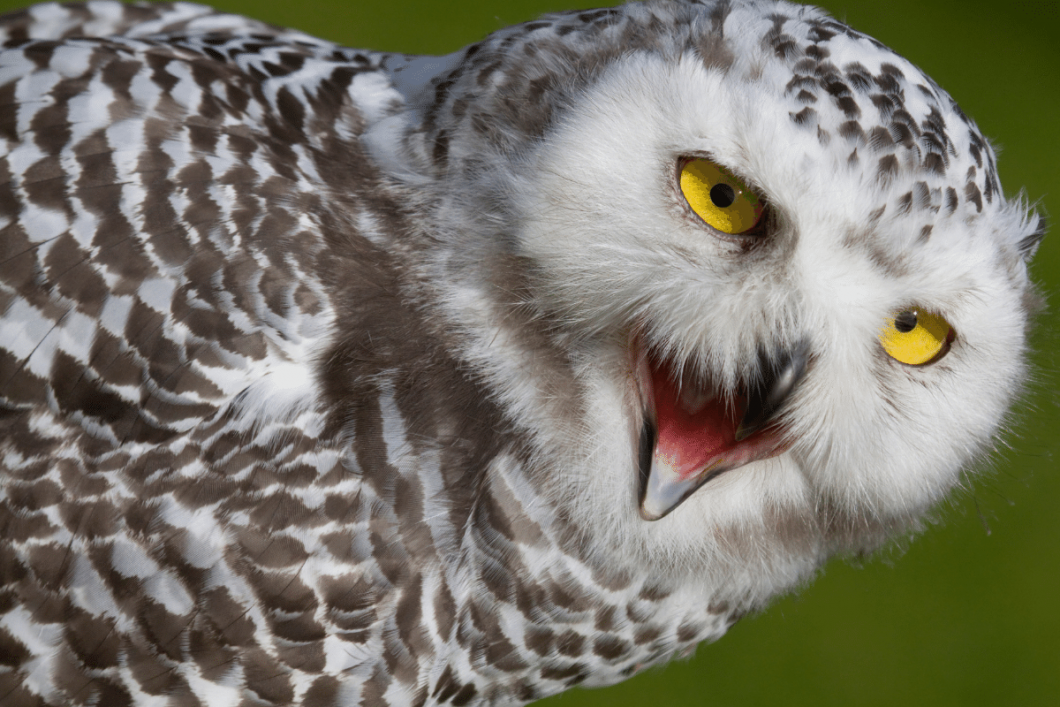 One of the largest owl species is the snowy owl. It is the heaviest owl species in North America on average. They have a highly distinct look, with some being pure white and others having black spots. With such a remarkable physical appearance and features, many people wonder what these unique animals eat.

So, what exactly do snowy owls eat? The snowy owl is a predatory bird. The lemming is their primary food source.

In some places, they might constitute the majority of their diet. They also consume fish, animals including rabbits, hares, voles, squirrels, and birds like geese, ducks, and songbirds.

What do Snowy Owls Eat?

Lemmings are a huge favorite of the snowy owls, and their populations in North America rely significantly on the density of lemmings. It feeds almost completely on lemmings and consumes them 3 to 5 times per day when they are available. According to National Geographic, a fully grown snowy owl consumes over 1,600 insects in a single year.

When lemmings are scarce, the owl feeds on a range of other small animals and birds. The snowy owl preys on muskrats, raccoons, ground squirrels, prairie dogs, mice, rabbits, marmots, rats, voles, hares, rabbits, and moles.

Other times, they eat ducks, murrelets, American coots, short-eared owls, ptarmigan, grouse, shorebirds, grebes, geese, gulls, and ring-necked pheasants are among the species it feeds on.

They are not picky when it comes to survival, despite their preference for specific prey. These predators have been spotted eating ducks, songbirds, seagulls, and other animals. On the other hand, owls, unlike other birds, do not usually drink from pools.

Instead, they get their water from the bodies of their prey. They get one gram of water for every gram of fat they ingest from their prey. Sometimes, they do drink a bit when taking baths in pools and ponds.

How long can snowy owls live without food?

Snowy Owls have substantial (19-22 mm) subcutaneous fat throughout the winter and are thought to be able to last 24-40 days without food, according to a Vos 1998 research.

When do Snowy Owls Hunt for food?

Because most of their breeding area is above the Arctic Circle, they are exposed to a routine of continuous daylight in the summer. Therefore they usually hunt when it is light.

With the right habitat, these hunters can hunt from sunup to sundown. These wintering Snowy Owls will often remain in one place for most of the day, becoming active around sunset and conducting most of their hunting at twilight or just after dark.

How do Snowy Owls Hunt for food?

To hunt, they will spend a lot of time sitting quietly and utilizing their amazing vision to locate prey. When prey is detected, they will quietly swoop on them with one completely swallowed.

Owls, like other birds, cannot chew their food. They utilize their sharp, hooked bills to rip victim meat into pieces, frequently shattering their skulls and other bones in the process. They are also capable of swallowing tiny prey completely, typically head first.

The owl will regurgitate pellets into the burrow and then seal the opening with a branch and leaves. All of this happens in under three hours. The reason for this is that it also takes up to three hours before the owl returns to the nest after eating, so there’s enough time for digestion to occur before they get back from their hunting trip.

However, Snowy owls have few natural predators. Foxes and wolves hunt them. Gulls will come to take eggs or chicks from their nest. And humans hunt them for food using their feathers and claws.

They are also harmed indirectly as a result of electrocution and car collisions. Climate change has shifted the beginning of spring, reducing the availability of prey.

What do snowy owls eat during winter?

Grey partridge, jackrabbits, weasels, and owls were among the other prey. Richardson’s ground squirrels were extensively eaten during the short period of hibernation beginnings and overwintering snowy owls. Male owls primarily focused on tiny rodents, whereas females ate the same but supplemented their diet with alternative and bigger species.

Snowy owls are mysterious and mysterious animals. They are the only species of the owl family that lives in the Arctic and they eat a wide variety of things. These creatures migrate south during the winter months to stay with their prey – large animals like reindeer or moose that live in these areas.

Snowy owls are large birds that feed mainly on lemmings and other rodents. They will also consume small animals and birds like meadow voles and deer mice but prefer bigger prey. They may seem beautiful as a pet, but they are very threatening to these prey.