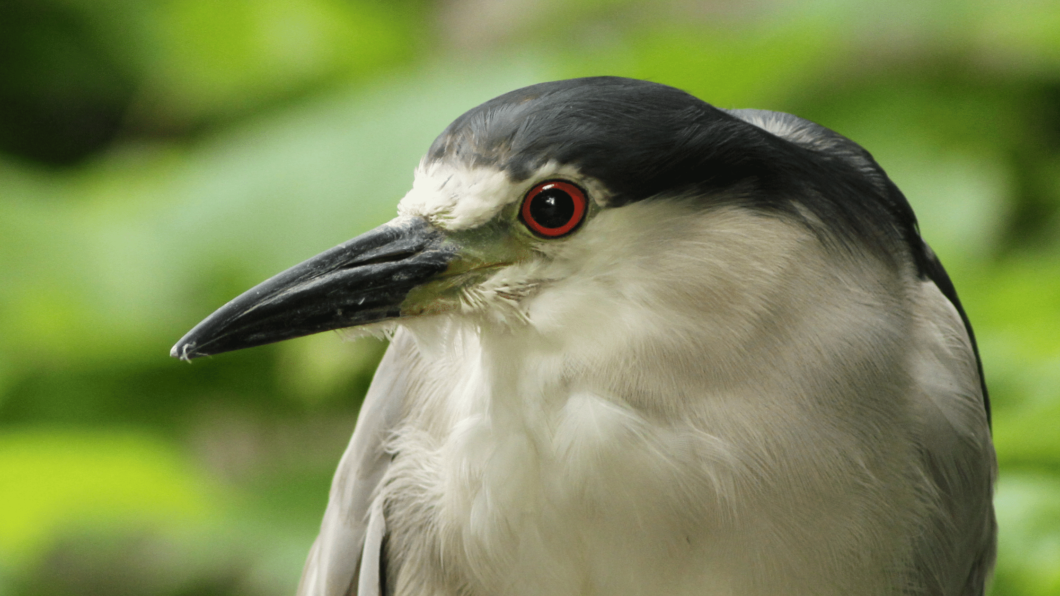 If you like to watch birds as a hobby or just when you are taking a stroll down the neighborhood park, you might have noticed birds. Take a minute the next time you are out, go past the color of their feathers and notice the color of their eyes.

You will see that some of them have red eyes. In some cases, this is the result of an infection or an allergy but in some, it is natural. Let’s take a look at which birds specifically have naturally red eyes.

Which Birds Have Red Eyes?

Here is a low down of the birds that have red eyes and where you can find them. Perhaps, there are a couple lurking around in your neighborhood and you never even knew it. So, this might help. 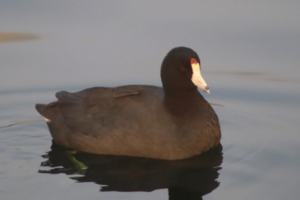 The scientific name of this bird is Fulica Americana. It is 15 inches long and weighs 1.5 to 2 pounds with a wingspan of 22.8 to 28 inches. It looks a little like a duck but it is smaller in size than a crow but bigger than a robin. The American coot has short wings and a small tail. It has large feet that you can see when it flies but it doesn’t do that very often.

They have white bills and a black head with the body being gray. These birds are called the American coot and they are certainly found in small water bodies like marshes and ponds in the US. But, they are spotted all over Canada too and if you are in the northern parts of South America, you are not entirely out of place looking for one. 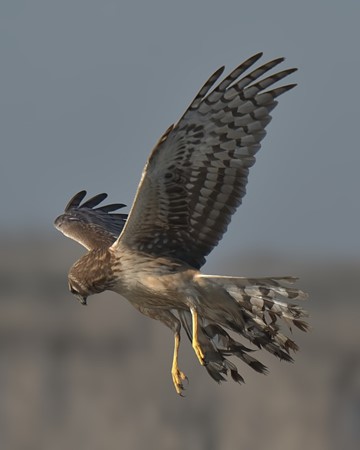 The scientific name of Cooper’s hawk is Accipiter cooperii and is 14 to 15 inches long. It weighs less than a pound and has a wingspan of 24 to 35 inches. Along with the red eyes, it has a black back, a white and dusky brown breast and a black crown.

This Cooper’s hawk is found in American forests throughout the year. These birds are known for their skillful flying because of their distinct flap. They also glide when in flight and are very stealthy which is probably helpful when they hunt other birds for food.

These birds are known to often fly by bird feeders looking to steal food that smaller birds have gathered and their own nests are high up in tree canopies. 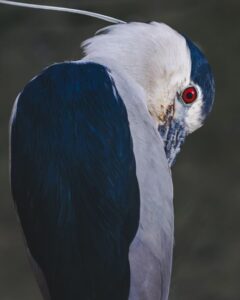 The third one on the list of birds with red eyes is the black-crowned night heron. Its scientific name is Nycticorax nycticorax and it is 23 to 26 inches long. It weighs 1.5 to 2 pounds and has a wingspan of 45 or 46 inches. Unlike the other herons, this one is mostly active during the night, hence the name. It is also known to be lazy and inactive during the day. They have red eyes, black crowns and a black back with a hint of white on their bodies.

The black-crowned night heron is bigger in size than a crow. They are known to frequent mudflats for existence but in North America, they are found in marshes, wetlands, streams and lakes. 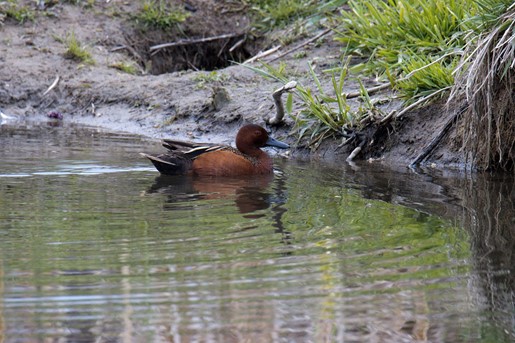 The cinnamon teal, on the other hand, is a species of duck and it gets its name from the deep reddish-brown color of its body. Its scientific name is Spatula cyanoptera and it is 10 to 11 inches long. It weighs about a pound and has a wingspan of 25 inches. The male cinnamon teal has a black back and a long bill which makes it easy for the bird to navigate the freshwaters and swamps where it spends most of its time. It is also found near estuaries and reservoirs.

The canvasback is a type of diving duck and its scientific name is Aythya valisineria. It is 18 to 22 inches long, 1.8 to 3.5 pounds heavy and has a wingspan of 31 to 35 inches. These birds have a white body, black chest, brown head and the male birds particularly have noticeable red eyes. The female canvasbacks have brown eyes. This duck is larger than a crow in sheer size.

These birds love deep waters but they are often found in smaller water bodies like marshes, lakes and ponds in the US and Canada in the breeding season. The rest of the time, they can also be spotted in Mexico. 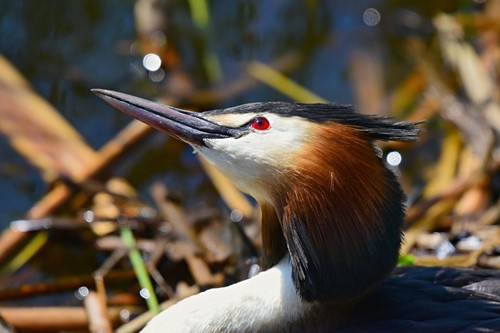 There are many different types of grebes that have red eyes. This first one is called the great crested grebe but its scientific name is Podiceps cristatus. These are famous water birds that are 18 to 20 inches long and weigh 2 to 3.5 pounds. They have a wingspan of 23 to 29 inches and a lifespan of 10 to 15 years. They are distinguished from the other grebes with the black crests on their head and neck. But their face and body are white in color. They have wings that are dark brown in color and the bills are a mild pink.

Since they are water birds and have excellent diving skills, great crested grebes are very good at hunting underwater. These birds are easily found all over Asia, Russia, Mongolia, Europe, New Zealand, Australia and some parts of southern and eastern Africa.

Then we have Clark’s grebe which is 21 to 29.5 inches long and weighs about 3 pounds. Its scientific name is Aechmophorus clarkii. The bird has a wingspan of 31 to 32.3 inches and a lifespan of 10 to 12 years. For a long time (meaning until 1985) these birds were thought to be the same as western grebes because of the many similarities. Clark’s grebes are migratory birds that are spotted in California, Arizona, Nevada and central Mexico. But in the winter, they move towards the Pacific coast.

These birds have dark gray plumage, bright yellow bills and a white-ish body. The male birds also have a crest on the head which is how you can tell the females apart.

The western grebe, on the other hand, is scientifically called Aechmophorus occidentalis and is about 21 to 29.5 inches long. It also weighs about 3 pounds and has a wingspan of 31 to 32.3 inches. But these birds also have other names like swan grebes and have green-yellow bills, which is how you can tell them apart from Clark’s grebes. 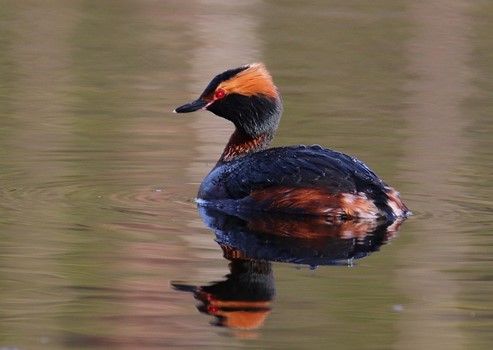 Then there is the horned grebe which is scientifically called Podiceps auritus. This bird is 12 to 14.9 inches long and weighs 0.5 to 1.2 pounds. It has a wingspan of 21.6 to 29.1 inches and a lifespan of 10 years. Unlike the other grebes, this bird does not eat insects. It is also called the Slavonian grebe and has two subspecies—Eurasian and North American. The former carries on its breeding from western China to Greenland while the latter takes over US and Canada.

But both types of birds have a black and white plumage which is probably why they are often confused with the black-necked grebes. But this plumage becomes red and black when it is the breeding season.

Then we have the rosy-billed pochard which is scientifically called Netta peposaca. It is about 22 inches long and weighs about 2.5 pounds. The rosy-billed pochard lives anywhere from 5 to 15 years and is a herbivore. These birds are also diving ducks and are referred to as rosybills from time to time. They are originally from South America but you can also find them in Argentina, Paraguay, Uruguay, central Chile and southern parts of Brazil. In the winter, they migrate to the southern parts of Bolivia.

These birds have red bills which is where they get their name from, black spots on the edges and a black body with white streaks on the wings. And of course, the red eyes which is why you are here. 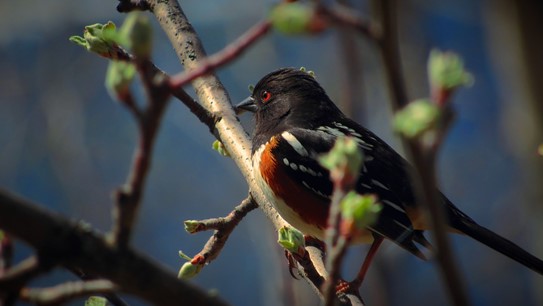 And finally, the spotted towhee is another bird that has naturally red eyes. Its scientific name is Pipilo maculatus and it is a large-sized New World sparrow. It is 18 to 20 inches long and weighs about 1.6 ounces. It has a wingspan of 10.5 inches and it lives for about 11 years.

This is a passerine bird so it is well known for its perching abilities and it only eats insects. Back in the day, they used to be called Oregon towhees because they were popularly found in the wetlands and forests of Oregon. Apart from that, they were also found in Washington, Utah, Nevada and Arizona. These birds are big fans of dry trees and are known to breed across the northwestern parts of North America.

They have an interesting tail that is in the shape of a fan and the entire bird itself is as big as a robin. It has a black head and neck, it’s brown on the sides and the underparts are white in color. The wings are black with white streaks on them.

What Causes the Red Eyes

Now, while these birds have naturally red eyes, a lot of other birds have red eyes because of conditions. In nature, red eyes are the result of the evolution of genes wherein the birds have less melanin content in their iris. Because of this, the blood vessels become more visible and over time, the iris develops a pink-red color.

There are quite a few other reasons why birds have red eyes and some of them are not pleasant.

Albinism is a condition where the bird’s body has no melanin. It might also be the result of having less melanin compared to the other birds in the same species. This might also cause the eyes to be pink or red because the blood vessels are very visible.

This is a rare condition that usually leads to skin discoloration and the red eyes are a part of the package deal. Albinism is a part of nature even in birds but it is a rare phenomenon. And since they don’t have the necessary pigmentation, it often shaves years of their life.

It is also a condition that weakens the structure of their feathers which causes the bird to wear out sooner than it should.

Some birds also develop red eyes as they get old. This is more common in birds that have a yellow iris that slowly turns red over time. This is a natural change for the bird in which case there is no reason to worry about it. But if you have a bird as a pet and its eyes are turning red, there is no harm in getting ahead of the situation by calling a vet.

Unfortunately, air pollution that is largely caused by human beings is a big reason for some birds to have red eyes. This happens because the pollution causes illnesses and infections which start off with a red eye. As expected, this is more common among birds that live in urban areas, like pigeons, that are more exposed to activities that cause pollution. This is also a common occurrence among pet birds that live in households with a smoker.

If you do have a bird and a smoker in the same house, please do not keep them caged in the smoking room or balcony. It causes sinus damage and the obvious—respiratory illnesses.

Red eyes when not natural might also be caused by allergies. In some birds that can be caused by avocados, salt, caffeine, certain seeds and such. It is tough to identify the root cause so prevention is a better path to take in this case. But if it’s not for any of these reasons, enjoy those red-eyes beauties whenever you can find one. Happy birdwatching!