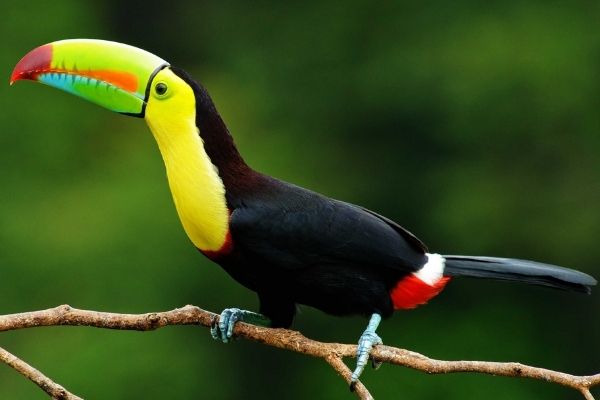 The toucan is a very interesting bird not just because of how it looks. Almost every aspect of this bird’s existence is designed to help it live in the rainforests that are its natural habitat.

To be clear, there are about 40 species of birds in the toucan family. So, we are going to talk about them in a general sense. They come in many different sizes from 7 inches to slightly more than two feet. Here’s what else makes them exquisite birds and also tells us a thing or two about how they live.

How Do They Look?

Most of these birds have a neck that is short but thick. They have colorful, lightweight and large bills which makes it easy to recognize them in the wild or otherwise.

And toucans use these colorful bills quite tactfully to attract their mates. And you will find the bills in a range of colors like black, white, blue, green or yellow or a combination of these colors.

The bills are also rather sharp in case you are tempted to touch them if you ever catch hold of one. But they are helpful to the birds because a big part of their diet consists only of berries and fruits.

The sharp edges of the bills help the birds to squash the fruits, tear them apart and eat them. If you ever find a toucan feeding on large fruit, you will notice how skillful they are in using the bills to tear parts of the fruit to eat them comfortably.

Toucans are also known to eat lizards and smaller birds. The bills also have an important role to play in cutting the prey open.

Toucans also have a tongue that is narrow like a feather. These birds are also rather noisy and make sounds that are quite sharp and unpleasant to the human ear. Needless to say, it is not a pleasure to be around these birds and hear them communicate with each other.

Where Do They Live?

Toucans typically build their home inside the holes in trees. There are plenty of those in rainforests. They are not loner birds which means you can expect to spot them either paired up with another bird if not in a small flock. They lay eggs once every year.

Normally, you will find toucans in the rainforests of Central and South America. This, of course, differs from one species to the other. Consider these examples.

Safe to say, toucans are typically found in rainforests and they rarely ever leave that canopy. And it makes sense too if you think about their role in that ecosystem.

Rainforests consist of a lot of fruits which is the main food for these birds. And the birds are an important part of dispersing the seeds of these trees, which is crucial to the ecosystem of a rainforest. And in turn, the rainforests have tall trees where the toucans can sleep which makes it a symbiotic relationship.

If you ever see a toucan in the wild, you will notice that they turn their head around and tuck in the bills under the wings. The only exception to this might be the toco toucan which is found in eastern parts of South America. They are still close to the forest areas in the region but also tend to dabble in the wet grasslands nearby.

How Are They Socially?

Toucans are fairly social birds even though they don’t like to live in large flocks. They are fine with flocks of six to 12 birds. So, it’s a little like having a good circle of friends, but you don’t want to live in a dorm with them all. They live in these small flocks also to keep themselves safe in the rainforest. We’ll tell you how in a minute.

The socialization of toucans also has a keen purpose apart from the ‘safety in a crowd’ notion. They use this time together to groom each other with their bills. They also keep moving in the rainforests along with the seasons to make sure there is plenty of supply of fruits throughout the year.

And then, there is the way they communicate. These birds typically have two distinct sounds which is how any group of toucans is organically divided. Some of these birds croak while the others yelp.

For example, channel-billed toucans are croakers and they sound like frogs. White-throated toucans and black-mandibled toucans are yelpers because their sounds are a lot sharper than the rest. In fact, the cries of these yelpers also tend to travel further along the forest than the frog-like croaks of their counterparts.

You can use these sounds to identify these birds in the wild. If you are on any such expeditions, try to notice how they repeat the coarse and deep sound pattern with impressive consistency. And if more than one of them is talking, the overall sound is like a rattling. This pattern of overlapping chit-chat is not unusual among toucans.

Apart from the croaking and yelping, they also produce a clacking sound with their bills to talk to each other. But their communication is not limited just to sounds.

Since they are sort of nomadic in nature, these birds are by nature very perceptive. They use visual, tactile and chemical stimuli to understand the environment around them. This is very important when they are in a new part of the rainforest where they have landed in search of food.

Even though these birds are not great at flying, they have techniques to move from one place to another because they have to, for survival. When in flight, they sometimes glide and alternately switch to flapping rapidly.

This is helpful because they have short and rounded wings. And when they spot food, they hop and walk across the branches to get to the fruit.

Adapting to the Weather

The weather in a rainforest is usually warm and the temperature does not change all that much at night either. But toucans feel the need to regulate their body temperature and for this, they often adjust their blood circulation.

The blood is sent to the beak which needs protection from the weather. At night, they keep themselves warm by tucking the beak under their wings as they fall asleep.

It has been established that toucans are not excellent fliers which is another reason why they like staying inside the canopy of the rainforest. As it is they have to move around plenty in search of fruits. Some species like the keel-billed toucan have more tricks than others to adapt to the ways of a rainforest.

For example, this particular species of toucan has a beak that is gentle and protracted. Its bills are made of keratin which is why they are as long as they are. And despite the length, these bills are quite lightweight. This particular type of toucan also has colorful bills which are designed to keep predators away from it.

The beak is an interesting way for all toucans, in general, to adapt to rainforests. These beaks are also huge and colorful which makes them look a little funny because it is out of proportion with the rest of the body.

The beak is also an important part of what helps the toucan eat nearly every tropical fruit which is mostly what the bird eats. The rainforests are filled with seasonal fruits which keeps them on the move, as mentioned earlier.

Add to that, toucans also have very good eyesight which they need every time they relocate. Toucans are able to spot predators soon enough to make it easy to fly away safely to a distance. Considering these birds are bad at flying, the extra heads-up can be a literal life-saver for them.

The toucan also has four toes on each foot. Two of them face forward and the two others are turned backward. This design helps the toucan climb tall trees and also have a better grip on the branches while they are perched on their favorite spot.

Toucans are very exciting birds. They mostly eat fruits and berries which are seasonal in a rainforest. For this reason, they have to move a lot. But unlike many other birds, they are not great fliers.

So, they also don’t shy away from hopping and walking on tree branches to get their fruit. This heavy fruit diet is also why they end up dispersing seeds across the rainforest which makes it a great relationship.

These birds also have interesting and very colorful bills which have a great role to play in the toucan’s survival. The bills of some species of toucans are meant to keep the predators away. They are also quite sharp which helps the bird cut open and eat the fruits.

They also have excellent eyesight which gives them a heads-up when there’s a predator around. This way they can get far enough from the predator despite being bad fliers. Almost everything about this bird is geared towards helping it survive life in a rainforest.