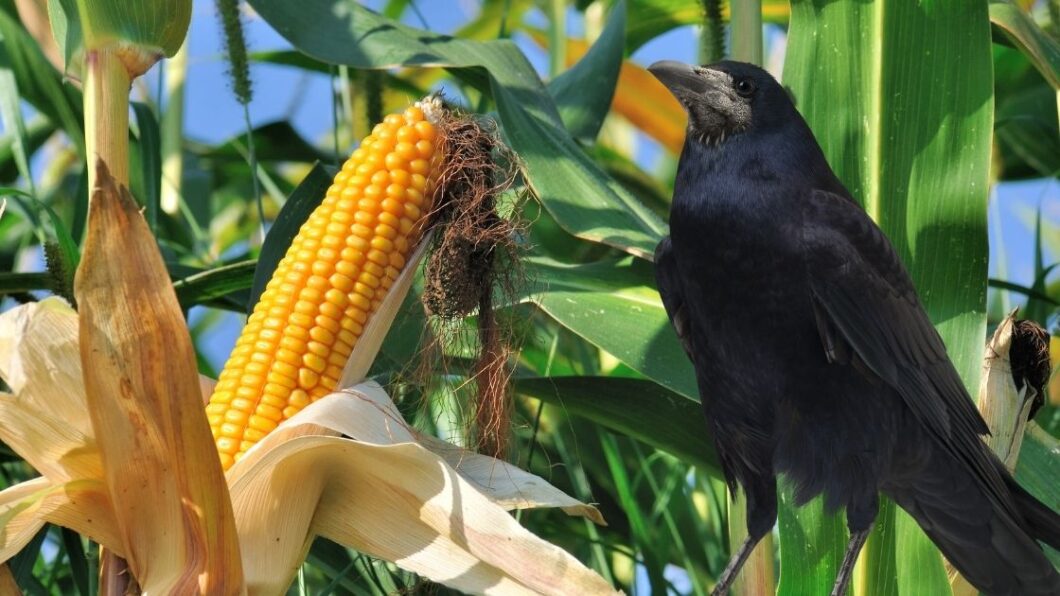 Crows are the most opportunistic animals you’ll find in the city and the wilderness. They’re known for their intelligence and social behavior in that they could steal prey from another predator. However, they’re also the kind of creatures that would feed on grains, along with fruits and vegetables.

Corn is one food that people can use to befriend crows as much as it can disadvantage farmers. On the other hand, preference for this grain can also vary per species, especially since these animals have many options. And, as much as the substantial nutritional value present in corn, it can also become poisonous for crows. Read on as you learn about crows’ intake of corn.

Crows are omnivores, which means that they’ll eat just about anything. They’re not picky eaters, so they have many options, from seeds to dead animals. Preference could depend on availability since different species of crows are also living in different habitats.

For an overview, here are some of the food that they’d usually scavenge.

Crows aren’t picky eaters; they’d eat all kinds of fruits and vegetables such as apples, bananas, peppers, and potatoes. As long as it’s available in your yard, they’ll indulge in it even if they don’t like its taste. That’s why some people find them problematic because they would eat your crops even if they’re not welcomed.

Small animals that are dead or alive that may be land or sea creatures are on the main list of a crow’s diet. In some instances, they’d snatch an eagle’s prey because they’re unlikely to hunt bigger mammals. Crows would mostly rely on dead animals or leftover meat from your usual butcher shop.

It doesn’t matter if the food has a hard texture when discussing a crow’s diet. They’d eat seeds if that’s the only choice they have, and they’d be glad to have the plainest peanuts. Taste and texture don’t seem to matter, which means they wouldn’t also hesitate to eat any grains.

They’re known to be a pest for corn farmers because of their interest in this crop. You’ll easily attract crows if you have a corn kernel in your yard. After all, their fondness for it is on the same level as meat, which is the first option for crows. You can say that corn is the next thing they look for after animals.

Attracting Them With Corn

Having pets is one thing, but being able to tame or befriend a crow could be a new experience or skill you’d like to have. All you need is some corn, known as one of their favorite foods. You can easily catch the attention of crows that are lurking around your neighborhood if you leave corn kernels in your yard.

It won’t even matter if you don’t have a designated place for it. Scattering it around will be sufficient because crows are scavengers that navigate the area to find food. With this animals’ intelligence, it’ll be sure to remember you as a friend that provided food.

You might even start to see them waiting for you in your backyard once you give them corn regularly. It’s no wonder cornfield owners can find them a nuisance. Their attraction to corn will make them go for it regardless of whether it’s on a cob, cracked corn, or a corn kernel.

American crows will eat anything that counts them as one of the corn eaters in North America. On the other hand, Pied Crows only eat seeds and peanuts even though it feeds both on plants and animals. It’s a species from Africa that mostly relies on catching invertebrates.

When it comes to food availability, changing seasons can determine when crows eat corn. For instance, Northwestern crows that live on the northern pacific coast would switch to grain in the winter, even when they prefer dead animals in the summer. That’s why you might find them at your house if you leave your windows open.

Others might not like corn, while you’ll find that some crows would divulge on the most grains. The Torresian Crows, found in Australia, rely heavily on corn compared to the others. In comparison, Hooded Crows can also end up in your cornfield since they’re not afraid of humans.

Why Corn is Good and Bad for Crows

Fresh and mature corn is healthy for crows because of its protein, fiber, and high oil content. It contains multiple vitamins, minerals, and antioxidants to combat possible diseases. With its size, the food also works well with their digestive system knowing that crows only pick up their food and swallow.

Crows are exposed to harmful substances because they eat almost everything. They can benefit from the antioxidants of corn as it minimizes cellular damage. It’s another good source of nutrition when fruits and vegetables are inaccessible. Even with dried or cracked corn, crows can still benefit from its protein and fiber, which help digestion.

However, corns are most beneficial when they aren’t processed because they are vulnerable to developing toxins. When there’s no proper storage, fungi may grow on the corn and harm the crow. Moreover, crows can experience harmful effects if they encounter corn containing chemicals used for planting.

Crows eat corn, and even more so in the winter, depending on the species. It’s one of the grains they prefer and something they’d seek when there’s no meat available. They’d turn to leftovers if there were no dead animals in sight.

Because of their fondness for corn, people can use it to attract them. They’d eat any corn such as fresh ones, cracked, or kernel. The grain’s texture and size suit their digestive system while offering substantial nutrition.

But corn can also become harmful to crows if it contains certain chemicals. And although crows, in general, would eat anything, not all species include this in their diet. The season and food availability are elements that influence crows if they’d eat corn.