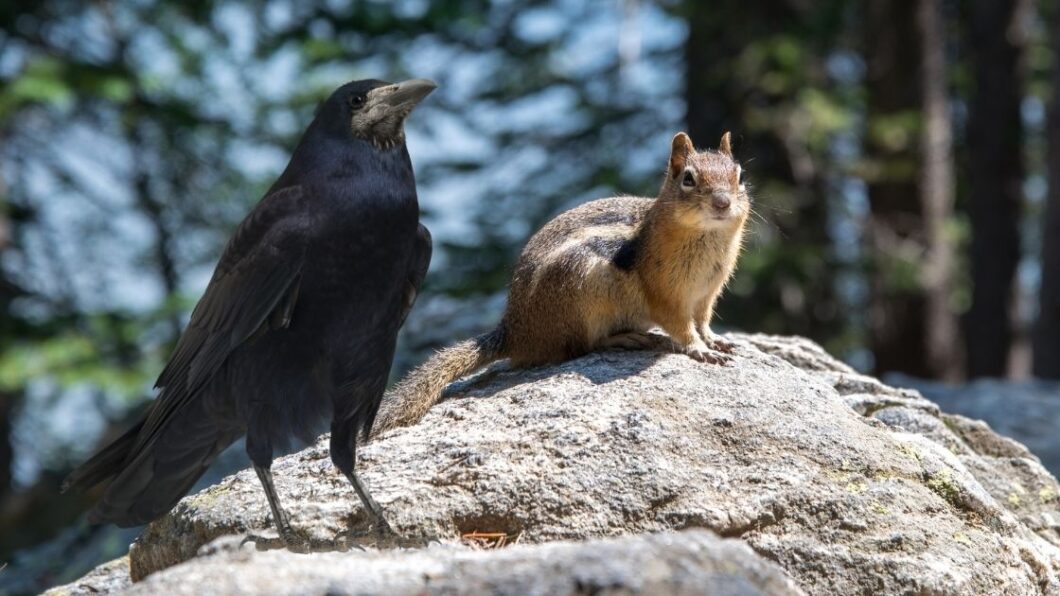 You might often see crows and chipmunks visiting your garden or backyard. Have you ever wondered whether these two animals are friends or foes? Crows are omnivorous animals that can eat different kinds of animals. They mainly target small creatures that cannot escape and fight when they attack them. Read on if you want to find out if crows eat chipmunks.

The crow is a bird that can hunt both animals and plants. They are known for their ability to find food no matter what it may be, with the chipmunk being an easy target because of its small size and good meat content. With this, crows generally can eat chipmunks.

Why Do Crows Eat Chipmunks?

Crows and chipmunks can often be seen living as neighbors. While crows reside in tree branches, chipmunks live in burrows or nests. However, when a crow needs something to eat and can’t find anything, it tends to eat a baby chipmunk nearby.

Normally, you would see crows feeding on dead animals. However, when they encounter difficulty looking for dead creatures, they will attack and eat small, live animals. Because they can feed on both plants and animals, they will eat anything they see, especially when hungry. Aside from chipmunks, crows would also chase and hunt down rodents and other baby squirrels.

Chipmunks are easy targets for crows because they are small and don’t attack back. They can only run to try to escape, but when crows have secured their target and start attacking, the chipmunk will not be able to survive anymore. Crows enjoy attacking prey that doesn’t have many capabilities to fight back, including chipmunks and other small animals.

How Do Crows Attack Chipmunks?

The exceptional hunting ability of crows helps them catch and attack chipmunks faster and more efficiently. Crows are famous for hunting aggressive prey, which they peck endlessly until the prey becomes weak and wears down.

Baby chipmunks are the common targets of crows when they have difficulty finding food because it’s easy to chase them down. They don’t react fast, run very slowly, and die easily. When crows see their target, they will peck continuously until their target slows down and stops fighting.

Crows also love catching live animals by their tails. Most chipmunks lose when crows attack them because crows mainly grab their tails to win.

There is no captured confrontation scene between a crow and a baby chipmunk. When a crow targets one, it mainly focuses its attention on the base of the chipmunk’s tail to secure it.

A crow would first do a single peck while slowly short lifting the chipmunk. Doing this will slow the chipmunk down from protecting itself. If the crow finds the chipmunk in an open and more exposed area, the success is more certain, and it becomes easier to catch and attach the chipmunk.

When a caught baby chipmunk is near its burrow, it will likely run to its burrow and escape since crows can’t attack and kill their prey immediately after catching them.

Crows vs. Chipmunks: Who is faster?

Chipmunks are swift animals, and they can run away quickly when being chased by crows. A chipmunk’s average speed is 21 mph, which is so much slower compared to a crow’s diving speed of 70 mph. However, chipmunks are hard to chase down on terrains where crows can’t move as fast as they usually can.

Several factors can affect the chasing outcome during a pursuit between a crow and a chipmunk. One of these factors is these animals’ movements. Chipmunks typically roam freely around trees while hiding and finding nuts to feed; they are also commonly busy taking care of their babies.

When chipmunks become too busy or preoccupied with finding food and taking care of their young, crows use that as an advantage and attack by pecking on them continuously.

The chipmunks’ tails are the end game because crows frequently catch and attack them by grabbing on their tails.

What Is Chipmunks’ Defense Mechanism Against Crows?

When a chipmunk senses that a crow has seen it, it uses its swiftness to try to run and escape from its predator. A chipmunk’s main defense mechanism avoids and escapes from the predator.

Because chipmunks are small, they can’t fight and attack their predators. Their best chance is to avoid or stay away from harm as much as possible with this. Chipmunks are naturally swift, using their swiftness to escape harm and danger.

Some chipmunks even signal their fellow chipmunks when they sense danger. They do this by doing warning calls through repetitive shrill and chirping noises. Some predators are bothered by the noise they produce and evade them.

Do Crows Eat Other Animals Too?

Aside from chipmunks, crows eat other small animals too. Rabbits are also targets of crows, especially the injured and young ones. However, crows tend to encounter difficulty hunting rabbits because rabbits can outwit even dangerous birds like owls and eagles.

Crows can also eat small birds, considering they are an important part of their diet. Some crows also hunt down a bird’s eggs and nestlings.

They can feed on other animals such as mammals, reptiles, amphibians, carrion, and eggs. Crows also eat seeds, insects, nuts, grains, non-insect arthropods, worms, and mollusks. Because they are scavengers, they are not picky eaters and will eat anything they see, especially when food is scarce.

Crows are omnivorous animals feeding on both plants and animals. They are scavengers and can practically feed on anything they see. Because chipmunks are small, they have become an easy target for crows. Also, crows enjoy chasing them down and eating their tasty meat, especially baby chipmunks who cannot run and escape as fast as adult chipmunks do.

During an attack between these two animals, the chipmunks’ main protection against the crows is their swiftness in running and escaping the predator. Most chipmunks will also hide near their burrows because most predators cannot attack them underground. However, crows commonly grab their tails to chase them down and attack them.