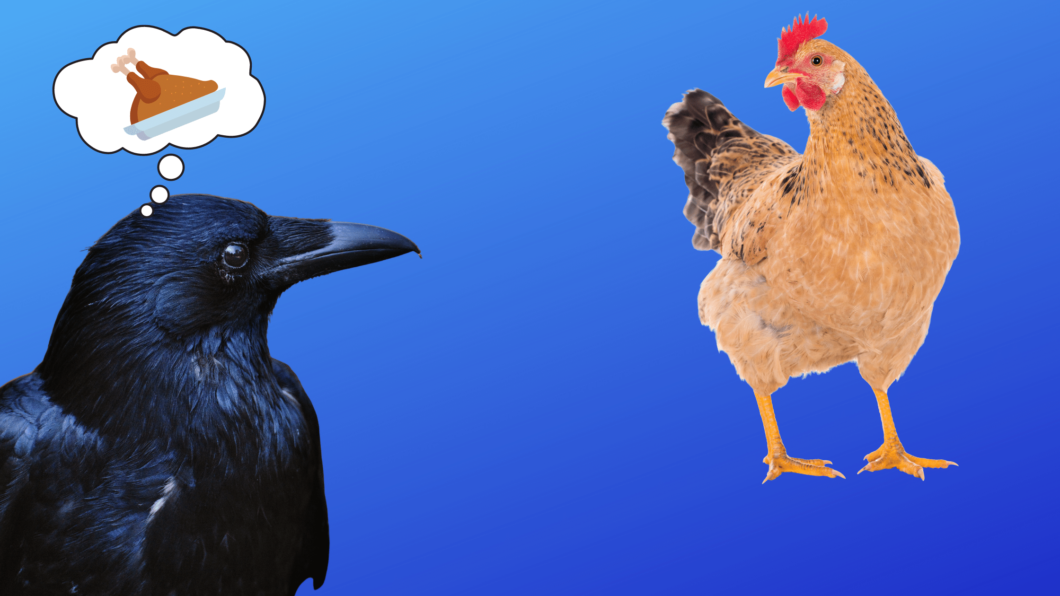 If you are a farm owner, chances are you have had issues with your chickens and crows but tend to hover over them regularly. Some people may find this a problem mainly because they keep coming back. Still, have you ever wondered if the chickens on your farm are truly in danger from these animals? Let’s find out.

Crows are known to be omnivorous creatures. They tend to eat everything they set their eyes on. However, people may ask whether they eat one of their own. Being predators, will they attack and devour follow birds such as chickens? Yes, they do. But under circumstances that food is scarce or want to get to the eggs or chicks.

The following paragraphs will try to answer this question and much more. If you want to learn more about these birds and their diet, don’t hesitate to continue reading. You will have no regrets about doing so.

Learning All About Crows

Before going any further, let us first discuss a little bit of a backgrounder about these predatory birds. Pros are any specific variation of glossy blackbirds found mostly in any part of the world except South America.

Crows are generally smaller than your average raven. They also don’t have thick bills, unlike the mentioned bird, although they belong to the same genus. About 40% of the Corvus species are known to be crows.

This particular term has also been applied to other similar-looking birds. However, the features mentioned above set them apart from similar species.

Large crows measure about 0.5 m or 20 inches in length. They also have a wingspan to reach about 1 m or 39 inches.

They usually live high above trees with a nest of twigs and twigs. They also live in large call and ease known as families. These groups of crows tend to hunt together and protect their young together. However, they will not nest in colonies.

These animals usually lay about five or six green or olive-colored eggs. Younger Kroll hatchlings usually spend about six years with their parents before breeding.

In the winter, crows are known to gather into large groups of night roosters. These particular flocks can include thousands of birds, allowing them to protect themselves from predators such as owls or larger birds like eagles.

This is also how they keep warm during the coldest winter nights. According to experts, Crows can live up to 13 years in the wild and 20 or more years in captivity.

These birds are known to be highly intelligent creatures that are great mimics. They can be trained to count to seven and speak more than 100 words or 50 complete sentences. Other similar species can also mimic the voices of their owners.

This can be quite a talent, especially when it comes to hunting. This is also why they capture other animals for their food. The next section will discuss their specific diet and what kind of food they eat to stay alive.

You will learn a lot from this if you want to protect your chickens from these animals sooner rather than later.

The Bird Diet: The Benefits of Eating Chicken for Crows

As mentioned earlier, these birds are known to be omnivorous. They usually prey on younger animals and smaller creatures. They also habit eating smaller foods such as berries, insects, and possibly other birds and carrion eggs.

This behavior is not popular among farmers who may have difficulty growing crops and have crows flying around the farm. Hence, the popularity of the scarecrow has always been a staple, especially in barns and traditional farmland.

Aside from killing younger animals and eating them, they may also have their way with roadkill, no matter what the animal it may be. They also had the habit of storing tidbits of their prey in trees to save them for later consumption.

They sometimes also store seeds in barks. These birds are also known to be quite adept at stealing food. They would occasionally steal from other animals, often enlisting the help of other crows to challenge smaller animals, even larger ones like vultures, for food.

Why Would Crows Attack Chickens?

While the dual does not need a habit of eating live chickens, these birds can attack the chicken to get to their young. They may also devour chickens that have passed and have their bodies lying somewhere on the ground.

This means that crows tend to attack the chickens first before killing them and eating them.

Aside from this, they also tend to eat growers and other birds that are smaller than them. If you want to encounter these attacks, make sure that your chickens are in a formidable cage in the future. Using traps and various ways of scaring off the crows is also advisable.

The Different Types of Chicken-Eating Crows

Almost all species of crows and ravens, as well as magpies, tend to eat younger chickens. However, they stay away from larger chickens and birds that can defend themselves. They usually attack in droves, often circling areas with dead animal bodies to feed on.

These birds usually perched themselves on high poles or elevated areas overlooking poultry farms. This way, they will have access to their prey on a much more regular basis. They take their time learning about the routine lumens of the animals on the farm.

They will wait for the right moment to attack chicken coops and carry away the eggs. They also attack and eat growers and smaller animals they can take on. This is why you need to protect your farm if you want to own one in the future.

Once they prove to be successful, crews will return repeatedly. Pros usually come about during May and June. It would be best to prepare yourself as a farm owner during these months.

The best way to protect your farm from crows would be to take care of other birds of prey that can devour in the fight off these pesky predators. Some examples of these animals include eagles, hawks, falcons, and even horned owls.

If you truly want to protect your flock of chickens from crows, don’t hesitate to take care of the birds mentioned above to counter the number of crows in your area.

It would also help you closely study these birds’ migratory patterns and behavioral quirks. This way, you will be able to prepare yourself for any attack in the future. As they say, knowledge is power.

If you have enough knowledge about these birds, you will be able to protect your chickens and other animals on the farm without difficulty. Don’t hesitate to read more about the behavior of these birds so that you can protect yourself and your pets more effectively in the future.