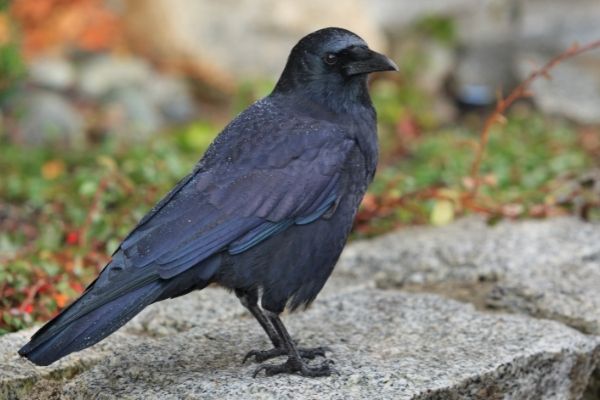 When we think of talking birds, it is parrots that we first think of. But if you have been around crows for a long time, you will start to wonder if they can talk too. That’s only natural and quite valid a question.

In fact, that is probably how you landed here and good for you because we are happy to tell you all about it. We will take a look at the physical aspects of a crow’s body that might enable it to speak.

We will also look at the conditions under which a talking crow might be possible. And yes, we will also tell you how they fare compared to parrots. There are a couple of other things too. We’ll let you discover them yourself. Let’s start, shall we?

Can crows learn to talk? While they don’t truly talk and hold conversations, similar to parrots they have what is called a syrinx. They use their syrinx to mimic sounds that they hear including human words. However, that is the limit of their ability. Crows cannot converse, say words on their own, or associate their words with people, places or things.

The Truth about Crows Being Able to Talk

These are intelligent birds and can imitate certain sounds and words. But they are also said to be a bit shy.

And if you compare them with parrots, they are not so great in terms of fluency even after being trained. If you can believe it, crows also tend to live a little bit away from human beings when they can help it.

So, they are not great when it comes to picking up clues from human sounds and words. But if you are dealing with a young crow, chances are that little bugger has more talent than their parent.

How Their Brain Works

Many researchers of avian behavior agree that both crows and parrots are very intelligent. It’s not surprising, considering they fly from one part of the world to another only to return to the same nest that they left. That’s pure genius of the brain. That too a brain that is about the same size as a nut.

The reason why you shouldn’t be fooled by the size is that the brain of a crow contains about 1.5 billion neurons. This is quite a good reason to believe that crows can be trained into talking, especially if you have a young one and one that is surrounded by human beings.

About Their Vocal Ability

Parrots usually make use of the syrinx, which is the lower larynx, which makes it possible for them to imitate human sounds. Obviously, they don’t really know the meaning of the words they are saying.

Parrots are just mimicking the sounds they hear. As is the case with parrots, you can also train some crows to imitate sounds. And you’ll be pleased to know that both birds have excellent memory which is a big part in helping them repeat the sounds back to you.

Can You Train a Crow to Talk?

Now to the million-dollar question, as far as crows and talking are concerned. Crows belong to the family of Corvidae which consists of over 40 species worldwide. These birds don’t have vocal cords like humans so they can’t talk like us. But they do have a syrinx and they do their best with it.

Other corvids like rooks, jackdaws, magpies and ravens also have the ability to mimic human sounds and words. Some of them are smarter than the average crow. For instance, corvids like jackdaws and ravens are known to imitate sounds like car horns and drills and they are spookily good at it. Get them near a dog and some of them even pick up the sound of a bark.

Some experts say that given enough time, crows are capable of telling the difference between different languages too. And apparently, they pay a lot more attention to the languages they don’t know compared to the ones they do know. Of course, they do this to make sure they know what’s happening in their vicinity.

When they are among people, crows use these same evolutionary advantages to learn sounds and words when we train them to do so. If you are going to do this, you must know that you have a better chance with a captured but well-treated crow than its wild counterpart.

That’s also because unlike crows that are in the wild, the domesticated ones don’t have to worry about survival and use their intelligence to learn what you are teaching them. So, yes. Crows can be trained to speak words.

Where to Begin and How to Go About It?

If you want to attract some of these birds to test out this hypothesis, you must get a birdbath or put some food of their liking in your backyard. If you have a pet, you can get them to say words that indicate that they are hungry.

Otherwise, a sweet good morning or night is also entirely possible. But training a crow to talk is not the easiest or the quickest exercise.

However, if you are keen on making it happen, you have a better chance if the crow is a pet that is treated kindly and spends a lot of time with you. It is also possible to try this with crows that you have befriended which makes them visit you on a daily basis.

You have to remember a few things about crows if you want to train them to do anything at all. That list looks something like this.

How and Where It Could All Go Wrong

The problem with making a crow your pet and keeping them captured in your home is that you might have noticed that this isn’t a common practice. That is because according to the Migratory Bird Act of 1972, it is actually illegal to:

…a crow, it’s eggs or nest unless you have a permit issued in your name. These laws exist to keep the birds safe from predatory humans who don’t care for the bird.

That means, while one of the key aspects of training the crow is to make it your pet, you are legally not permitted to do that. You might get one if you want to rescue, rehabilitate or use them as what is called an educational animal.

And if you find a crow that’s injured, don’t take that as an opportunity or excuse for the “rescue” or “rehabilitation” clause. Get it to a wildlife center as soon as you can. It is the kindest and the most right thing to do.

To summarize, yes crows have the physical and psychological ability to talk. They can be trained just like parrots and you will be surprised at the results. There are a few ifs and buts like starting the training when the crow is still young.

The results are also better if the crow spends more time with humans. Yes, they are quite intelligent, like parrots, and hence they can pick up our language. But they are not meant to be in captivity, legally speaking. So, don’t get yourself into trouble just to amuse yourself and those around you.