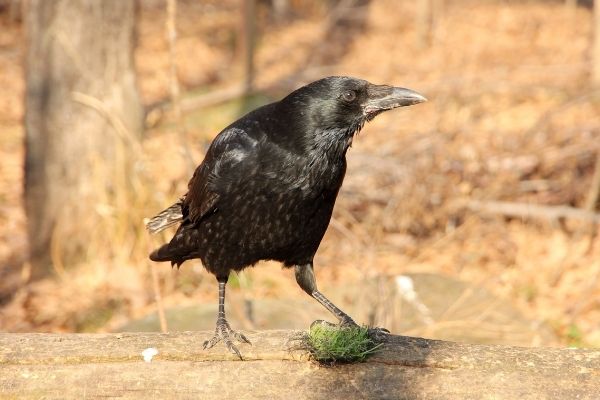 Crows belong to a family of birds called corvids. These birds are infamous for their bad behavior which leads us to think that they are nasty predators. How much of that is true? And are we confusing crows with ravens?

Well, that’s entirely possible. If you’re not a literary genius, you might even be thinking that Edgar Allen Poe was carrying a crow. It was a raven. But what gives these avians the reputation of being a vicious predator? Let’s dive in and find the answer.

Are crows predators? To answer your question, yes crows are predators but they are also scavengers. That’s why they eat almost anything and attack everything that could be food. Interestingly though, ravens are actually predators of crows. So, if you happen to spot them both, take a minute to watch what happens!

For starters, the confusion between ravens and crows exists because they look very much alike. They both belong to the corvid family and they are mischievous in their behavior.

They are known to rummage through trash cans for food, harass dogs and even tailgate scary raptors. They also do some unpleasant things like raiding the nests of other birds for their eggs, which makes it easy to dislike them.

But they engage in this type of behavior because they are both smart birds. In fact, they are famously quite intelligent and use all this intelligence in their search for food. Sometimes, they have to be creative and if you have a chance to observe them go for it. It can be quite fascinating to watch them in action.

You may not know this about crows, but they are very observant birds. They are highly capable of identifying faces and if you haven’t been nice to them, watch out because they are not very forgiving birds either. They are very likely to come back to harass you.

If you’ve heard Melissa McCarthy’s story about magpies, you will do yourself a favor in avoiding being a jerk to crows. Now, crows are indeed predator birds. And there are three very specific behaviors that give this away. Let’s take a look.

One of the most common behaviors among crows and other corvids is called mobbing. If these birds notice other birds like owls or hawks, they will gang up against the bird and dive-bomb it or screech till the other bird leaves their surroundings.

This practice is referred to as mobbing. An owl or a hawk can be called a classic predator. In their relationship with crows, the latter is the prey. So, it is good to know that this behavior is not entirely vicious. It is just how birds like crows respond when they see a predator. It can be called a defense mechanism. So, cut them some slack.

It is also more noticeable when crows do this because they are both loud and big in size. This is in comparison to other birds like wrens, titmice and chickadees that also indulge in the same practice.

They are also actually really good at hounding predator birds out of their space. And you will see this all year long but especially from springtime to the summer because that is the breeding season for corvids, including crows.

But sometimes, you will notice that they are hounding a bird that is not a predator of crows. This is true for the likes of osprey which just wants to get some fish. Corvid researchers say that this might be because they are just being extra careful when the species looks like one of their predators.

Mobbing also has social relevance to crows because they get to make a statement that they are perfectly capable of taking care of themselves. Forget corvids, which one of us hasn’t done that at some point or the other.

Crows pulling the tail of other animals is also not an uncommon sight. This is just one of the ways in which crows like to annoy other animals. They do this in the hopes that the other animal leaves their food.

Crows are famously omnivores which means they have a great deal of choices. But it works only if you can find food and tail pulling is just one way of doing that.

This is true for most animals including the likes of wolves that don’t like to share their food. The birds can’t wait till the wolves leave because there won’t be much left for them.

Instead, they sneakily get behind the other animal and bother it to no end by pulling its tail. This is how they physically annoy them away from their hard-earned lunch or dinner.

More often than not, it works and the mammal leaves. This is a type of parasitism at best and not a territorial move by the black birds. If you haven’t seen it in the wild, you might have noticed crows bully dogs in the same fashion. Dogs are easy targets especially when they feed outside the house.

Attacking Nests of Other Birds

The urban crow population does survive to a great extent from the trash that humans create practically everywhere we go. Since these birds can eat anything, it is usually not a problem. They find a pile of garbage in a driveway or attack a landfill and they are fine.

But eggs are an important part of what a crow eats and this might have turned into a bit of a problem for humans. But crows or even corvids are not the only species that are after eggs. It’s just that we end up seeing crows do this more often than the others.

For instance, cute little bunnies will also chase after eggs given the time and opportunity. Crows just like to go after the nests of smaller animals and are seen doing it.

Most of the time, crows aren’t being predators they are trying only to survive. But they do have predatory techniques to make that happen. That is because they are designed to be so naturally. Interestingly enough crows are one of the smartest birds on the planets.

The use their intelligence to feed themselves, and their families at all costs. Isn’t that what any good parent would do? Crows are often times made to look evil or like the bad guy, but in realities they are extremely smart scavengers that use the tools they do have to the highest level.